How to use experiments and drafts in Google Ads.

Campaign drafts allow you to make a copy of your current Google Ads search or display network campaign set up and make changes to it without affecting the original campaign.

You can choose how you will split the budget, whether you want it 50/50 or 25/75. This flexibility makes it a lot less stressful when making changes in a campaign.

What can you test with campaign experiments?

Campaign experiments can be used to test a range of changes to both search and display network campaigns. They are especially useful when making large changes such as trying out automated bidding strategies (such as target CPA) or maximise conversions bidding strategy.

Although they can be used for testing everything from ad extensions, negative keywords, ad rotation and to changes in the account structure, they are also useful when it comes to display and remarketing campaigns for testing changes to remarketing audiences, display interests, display placements and topics.

How to create a campaign draft in Google Ads.

Fortunately, creating a draft of a campaign is extremely straightforward.

All you need is to first choose which Google Ads campaign you want to create a draft of and then decide what change you would like to make to this campaign. It is best to make one major change at a time, so that you can tell what effect each change has on the campaign’s performance.

If you make a single change and then split the budget 50/50 between original and experiment this will make it easy to see what is performing better, between the original and the experiment. You can create up to five drafts per campaign at a time, but you are only able to run one experiment at a time per campaign.

Firstly, you need to sign in to the Google Ads account that you want to create a new draft of.

Then to create a draft click on drafts & experiments, in the white left-hand column. Once you are in then click on the blue plus sign to create a new draft.

Then you need to select the campaign that you want to duplicate from the drop down of campaigns. This will then create an exact supplicate of that campaign as a new draft.

Now you need to come up with a name for your draft.  It’s a good idea to use the campaign name then what you are testing for (so you can easily tell what you were testing for when looking back). A format like this “Campaign_1_Target_CPA”, this makes it easy to view the results alongside your original campaign. Then click save, you will then be taken to your new draft campaign.

Once you have created your draft, you are now free to make changes without fear of altering your existing campaign. This is when you can make changes to your draft.

Once you are happy with the changes then you can set up these changes as an Google Ads campaign experiment.

You can take your time making these changes as all changes that you make in the Draft are automatically saved so you can come back to the draft under ‘all drafts’ once you are ready to use this draft.

How to set up an Google Ads campaign experiment:

Once you have created a draft of your campaign and made the desired changes you can launch the campaign experiment. It is always best to only make one change at a time so that you can gauge easily what changes caused the results.

The best part is an experiment functions just like a campaign.

When launching the experiment, it’s best to run it with 50% split.  This is the fairest way to split the budget while getting enough traffic to test the changes.

Although, keep in mind that experiments cannot be run when you are using a shared budget, so you may need to further split up your budget before applying an experiment to a campaign.

Then when a user lands on a search page, Google randomly selects whether your original campaign or experiment shows, based on the split you selected.

In order to set up anGoogle Ads campaign experiment first you need to select ‘Drafts & Experiments’ from the menu. Then select the copy of the original campaign in which you made the changes to.

Then you click into the ‘campaign experiments’ tab and click the blue plus sign to add a new experiment. Then you will be asked to select an existing draft, then name your experiment.

I use the same naming convention that I used for the draft, stating the original campaign name, followed by what you will be testing such as ‘Campaign_1_Target_CPA_Test’. This makes it easy to distinguish what you were testing when looking back on past test data. 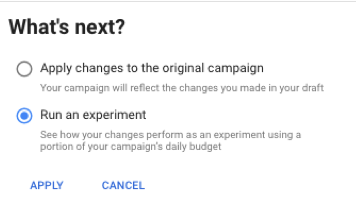 When you are setting up your campaign experiment it is always better to run the end date longer than you think you will need.

It is also a good idea to set a calendar reminder for a few days before the experiment is about to end, so you can check the performance and extend the experiment if needed.

Sometimes, for lower traffic campaigns, you need more time to get enough data to make a choice whether to apply the changes to the original campaign. 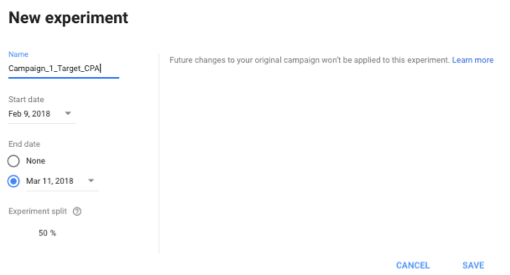 Then it is as easy as clicking save and your experiment will be live or ready to go live at the start date. Throughout the experiment you can monitor its progress in comparison to the original campaign in the performance comparison tool, which appears at the top of the screen once the experiment is live.

This snapshot makes it easy to track the progress of your experiment alongside the original campaign and is much easier to understand than in the normal campaign view. When viewing the campaigns as a whole, the experiment’s metrics will appear at the bottom of the table under ‘Total - all experiments’.

Why you should use Google Ads campaign experiments.

Fabric use experiments regularly as a part of their Google Ads service to test bidding strategies and other changes when optimising our clients’ campaigns.

It makes it a lot easier to make informed changes to a campaign without the risk of making these changes to the original campaign.  It helps us to be able to continue to get better results for our clients. We are a Google Partner and Google Ads company based in Auckland that use campaign experiments to test a wide variety of campaign variations.

Tips for designing a landing page for Google Ads

What Is Google Analytics Attribution Modelling

Do you want business
growth and need help?

Let's throw around some ideas and see where it takes us.
Let's get started